Male human barbarian appears 42 years of age. Stands 6’4" tall and weighs 250 lbs with long brown hair, brown eyes and a short stubbly beard. He is wearing a breastplate and heavy gauntlets and is armed with a two-handed swoard and dagger. An ornate amulet hangs around his neck.

Not ownly is he the owner, Bull is also frequently the chief bartender and head breaker at Dirty Bowbie’s. However, he is also often away from the roadhouse, leaving its daily operations to his trusted staff. Bull has a temper is not above a good blood feud, which has made him his share of enemies. Despite his rough edges, Bull values loyalty and will defend his close friends to the death. The party has had numerous dealings with Bull and he is often gruff, he has always kept his word and treated them fairly. 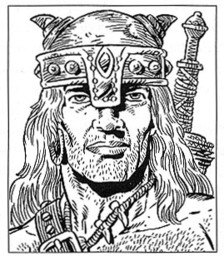