Male human cleric appears 40 years of age. Stands 5’8" tall and weighs 188 lbs with long black hair and blue eyes. He is wearing leather armor with a black hooded cloak. He carries a black kukri and wears a heavy iron shackle around his neck.

Drak is a mysterious figure and is clearly a cleric of the dark god Kharzarn. He rarely speaks openly and does his best to remain unapproachable. He is known to speed time at the Four Helms Tavern, but is an infrequent visitor. The adventurers encountered him at the Helms and members of
the group followed him to the Burned Western Docks section of Dro Mandras. There he had a short meeting with other dark figures and slipped out of sight. He is known to associate with thieves and assassins and is rumored to have a connection with the Murder Boys. Asalia has warned the group that he is best avoided. 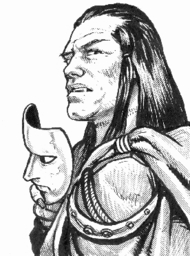