Naela is a young woman who grew up in a wilderness human village with her human father, Elles. Her elven mother and grandmother were said to have had the ability to read the web of fate, giving them visions and insight in to future events. Naela has inherited this same gift.

Naela always prefers to talk her way around conflicts, even when this leaves her in a vulnerable position. Though she describes herself as a “non-combatant,” she has proved to be handy with a dagger in critical situations. She is also good to have on hand for minor healing.

Her detractors would describe her as annoyingly verbal, impatient, and a little arrogant about her abilities. But apparently, she doesn’t care. 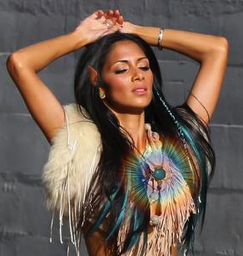